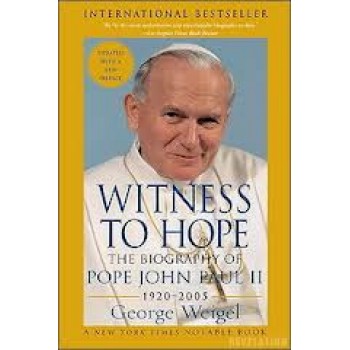 During the final decade of his pontificate, Pope John Paul II’s ailments fueled predictions of an early retirement. Yet anyone conversant with his singular life knew better: He would stay the course until the Lord called him home to “the Father’s house.”

Readers of George Weigel’s remarkable 1999 best-seller, Witness to Hope: The Biography of Pope John Paul II, were better prepared than most to understand why the Vicar of Christ who launched a global campaign to defend the dignity of the human person would embrace — not flee from — the humiliation of physical deterioration.

Now, in the sequel, The End and the Beginning: Pope John Paul II — the Victory of Freedom, the Last Years, the Legacy, Weigel completes the story of the Church’s third-longest pontificate, and offers the fruit of his own reflections on a spiritual father whose complex legacy is just beginning to be understood.

But Weigel’s sequel takes a slightly different form than its predecessor. It begins with an unexpected contribution to the historical record: The author has mined the extensive archives of Soviet-bloc spy agencies released in the wake of the fall of the Berlin Wall. Readers are offered juicy morsels culled from secret reports on Karol Wojtyla’s early days as a Polish bishop to his election as Pope and his orchestration of a nonviolent conclusion to the Cold War.

The high points and challenges of John Paul II’s last six years follow, with special attention to the Great Jubilee of 2000, his struggle to deal with the U.S. clergy abuse crisis of 2002 and the onset of Parkinson’s disease that imprisoned his body — even as it drew him closer to the cross and the path of “salvific suffering.”

An assessment of his legacy constitutes the final segment, providing the book’s most important contribution. Here, Weigel drills into his subject’s remarkable characteristics as a statesman and mystic, priest and friend. The reader begins to grapple with the fact that we can deeply love and esteem a great man of faith and still barely plumb the depths of deeply mystical fait