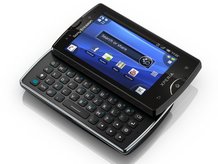 So, just as Sony Ericsson accompanied its X10 Mini with the X10 Mini Pro in 2010, this year's excellent new Xperia Mini is now accompanied by a heavier, sturdier model of the same size, the Xperia Mini Pro.

If you're in the market for a new smartphone, you can check out our quick video guide to what to look out for:

The new smartphone also has a slide-out QWERTY keyboard for those of you still stubbornly refusing to go 100% touchscreen.

When the keyboard is slid away out of sight, the Sony Ericsson Xperia Mini Pro looks exactly the same as the Xperia Mini.

The three physical buttons of last year's X10 Mini Pro have been replaced by one bigger, chunkier Home button, with new capacitive touch buttons for Menu and Back either side of it.

As with the Xperia Mini, it's a change for the better. The Home key is big enough to find without fumbling, while the touch buttons are sensitive enough to work every time, also without fuss. The change makes the Mini Pro look a little more stylish than the X10 Mini Pro, too, with the glass of the screen extending right down to the base of the phone.

There's one extra bit of functionality revealed by the front face of the Sony Ericsson Xperia Mini Pro - there's a second front-facing camera in here, producing low-res video and stills for web chats.

The connectivity options have been jiggled about to accommodate the sliding QWERTY keyboard. The top of the phone has the USB connector, which is covered by a little plastic stopper, plus the power and headphone jack, leaving the bottom of the phone completely featureless.

The right-hand edge houses the volume up/down rocker, while there's a nice, sensitive, two-stage shutter button for controlling the camera at the bottom.

The back is the same as the Xperia Mini. The snap-on cover has a matte, rubberised finish, making it easy to grip in the hand, plus the silver logos, trim and 'HD' text give it a nice designer appeal.

The Sony Ericsson Xperia Mini Pro features the same Bravia Engine and Reality Display combination as the Xperia Mini, with the result being a sharp, bright display running at 320 x 480 (HVGA) resolution.

Text is readable and icons clean and clear, while it's perfectly usable outdoors if you shove the brightness up to maximum.

The keyboard's sliding mechanism is solid, with the phone snapping open and shut in a reassuringly stiff manner. The keys are backlit, featuring a similar rubberised coating to the back of the phone, so they have a rougher, grippier feel to them than the ones on last year's X10 Mini Pro.

There's a useful selection of alternate characters accessed by pressing the blue button, plus you can pull up a selection of awful smiley faces and the even more special special characters by tapping the Sym button.

There's also a four-button cursor key array, a shortcut to the keyboard settings menu and a tiny status display in the Android notifications bar, alerting you if Caps Lock is on or if you've double-pressed and therefore locked the alternate character function.

As for the phone as an overall package, it's heavier than the Xperia Mini, which is no bad thing, plus the screen feels solid, is responsive to the touch and very well balanced for easy one-handed use.

The QWERTY keyboard is small, and you certainly won't be teaching Mavis Beacon any lessons when it comes to word-per-minute output, but the impression of the Sony Ericsson Xperia Mini Pro is of a solid, well-made phone, brimming with features.